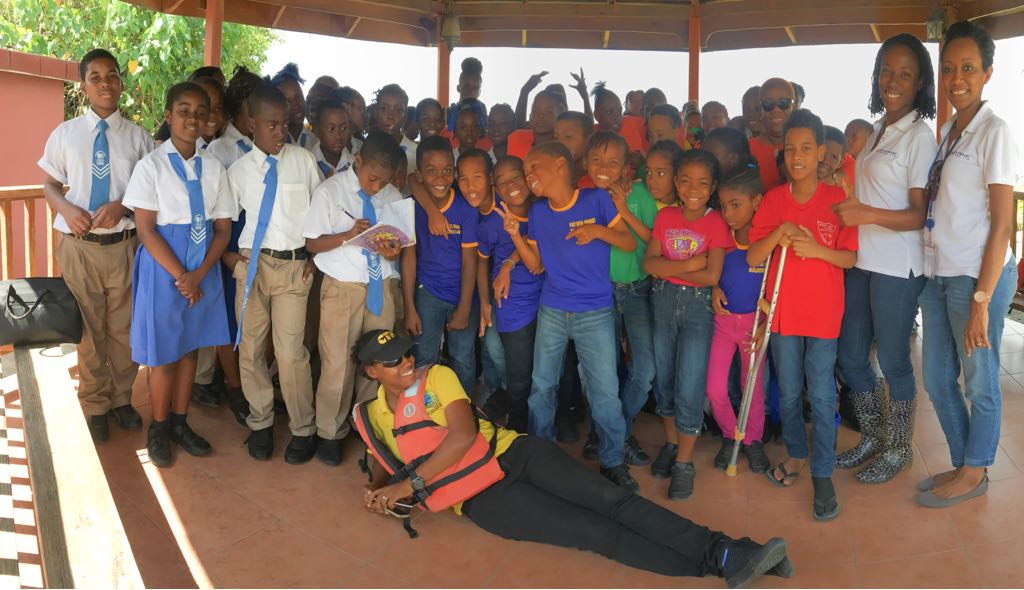 In February, over 60 students and teachers from two schools in the corporate area received an opportunity to learn about the importance of the biodiversity within the Kingston Harbour through a tour and field lecture at Refuge Cay and the University of the West Indies (UWI) Port Royal Marine Lab. The activity, which was sponsored by the Kingston Freeport Terminal Limited (KFTL) was carried out in partnership with UWI’s Centre for Marine Sciences.
The educational activity, which was held on February 2, in observance of World Wetlands Day 2018, under the theme, “Wetlands for a sustainable urban future,” also served to highlight some of the work being done to preserve wetlands in the Kingston Harbour. This includes the ‘Restoration and Cleanup of Refuge Cay Mangroves’ project, which is also being sponsored by KFTL and implemented in collaboration with UWI’s Port Royal Marine Lab and involves clean-up and re-planting activities at Refuge Cay.
Eleven year old, Zion Dowie, from Port Royal Primary school was elated to participate in the Refuge Cay tour. “It was an amazing experience to learn about the mangroves and I love how the workers are helping to get it cleaned. I want to encourage people to stop throwing garbage into the sea and into gullies and to throw them in garbage bags instead,” pleaded Dowie.

Moyen Campbell, Guidance Counsellor at the Harbour View Primary school and who was one of the teachers who accompanied the students, noted that “they were very receptive of the information and we will ensure they share with others at their school, the lessons learned about the importance of keeping their surroundings clean.”

The World Wetlands Day tour for students and the ‘Refuge Cay Mangroves Restoration and Cleanup’ project, are among several community outreach activities which KFTL sponsors as part of its Corporate Social Responsibility. KFTL has also sponsored another project which will benefit the Kingston Harbour –  the ‘Port Royal Cays Coral Reef Rehabilitation,’ which will be implemented over a five year period and will feature the design, installation and monitoring of artificial reef structures on the Port Royal Barrier Reef.